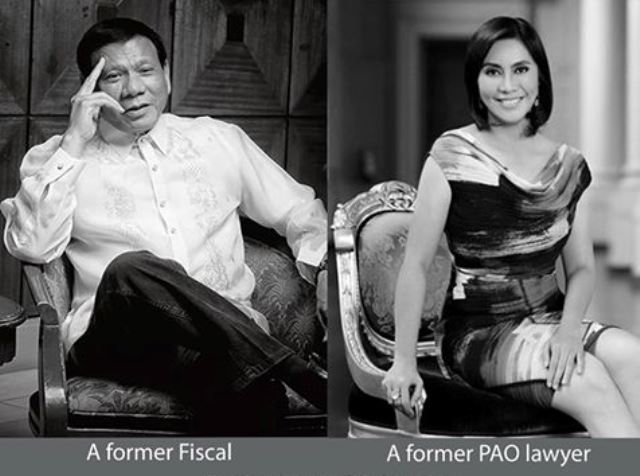 According to Chinese philosophy, yin and yang  describes how the opposite or contrary forces are actually complementary, interconnected, and interdependent in the natural world, and how they give rise to each other as they interrelate to one another. This is how I would describe President-elect Rodrigo Duterte and Vice-President-elect Leni Robredo  in terms of their governance and  their personal perspective on social and political issues.

Rodrigo “Rody” Roa Duterte was born on March 28, 1945, also known by the nickname Digong, is a lawyer and a politician, who is the President-elect of the Republic of the Philippines, after topping the official Congressional canvass for the 2016 election.

Duterte will become the first Mindanaoan president. He is among the longest-serving mayors in the Philippines and has been Mayor of Davao City, for seven terms, totalling more than 22 years. He has also served as vice-mayor and as congressman for the city.

Currently, Dutertes children, Sara won the Mayorality position in Davao. She served as Davao City mayor from 2010 to 2013, becoming the first woman local executive chief of the city while her brother Paolo, who ran unopposed in the vice mayoralty race. Both Sara and Paolo ran under Hugpong sa Tawong Lungsod, a political party which their father Rody founded. Duterete opposes the provisions of the proposed Anti-Dynasty Bill as he finds it undemocratic.

Known for his ironclad-type of leadership, Duterte has admitted his links to the Davao Death Squad, which is allegedly responsible for summary executions of criminals in the city. Duterte promises major changes in  the country. He also vows the return of the death penalty,  public hangings of criminals, allowing police to shoot people involved with organized crime, a ban on smoking and drinking in public areas, and punishing parents who allow children out after 10 p.m.

More recently, Duterte slammed the Commission on Human Rights Chair Chito Gascon and incoming Sen. Leila de Lima for its resolution claiming that Duterte violated the Magna Carta for Women when he uttered his infamous rape remark. Calling the CHR Chair an “idiot”.

On the other hand, Leni Robredo born Maria Leonor Santo Tomas Gerona on April 23, 1964, is a human rights  lawyer, social activist, and politician who is the Vice-President-elect of the Republic of the  Philippines, after topping the official Congressional count of the 2016 election.

Robredo, widower and mother to three lovely daughters,  ran as Vice President of the Philippines under the umbrella of the Koalisyon ng Daang Matuwid (Coalition of the Straight Path) administration-backed line-up which seeks to translate good governance in good economics, as the running mate of presidential candidate Mar Roxas of the Liberal Party.

She  served as the representative of Camarines Sur’s Third District to the Philippine House of Representatives, having been elected in the 2013 general election.

In Congress, Robredo was consistent with her work on rural development, women empowerment, and improving governance.  Some of the bills she filed are: National Food Security Bill of 2015, Anti-discrimination Bill of 2013, People’s Participation in Budget Deliberation Bill, People Empowerment Bill of 2014, Full Disclosure Bill and Freedom of Information Bill.

Leni is the co-author of House Bill 3587, known as the Anti-political Dynasty bill, which in its curremt form aims to prohibit relatives up to the second degree of consaguinity or affinity to run for any elective position.

In a previous interview, Robredo said that there are things that you cannot compromise such as human rights and hopes the she will be able to change Dutertes viewpoint. After the final COC was tallied and declared Robredo as the winner last night, in an interview with the press that, “it is my obligation as a Filipino to support Duterte 100%.”

Meanwhile, due to the insistence of the press in an interview , Duterete was asked what position he would give to Robredo, he said “ since I have no position to give, I just said, “assistant president”.

Yin and yang, two halves that together completes wholeness. Two forces in the universe, according to a Chinese theory: yin is the passive, negative force, and yang the active, positive force. It is the starting point of change. Let’s hope that Robredo is the yang in Dutertes yin.