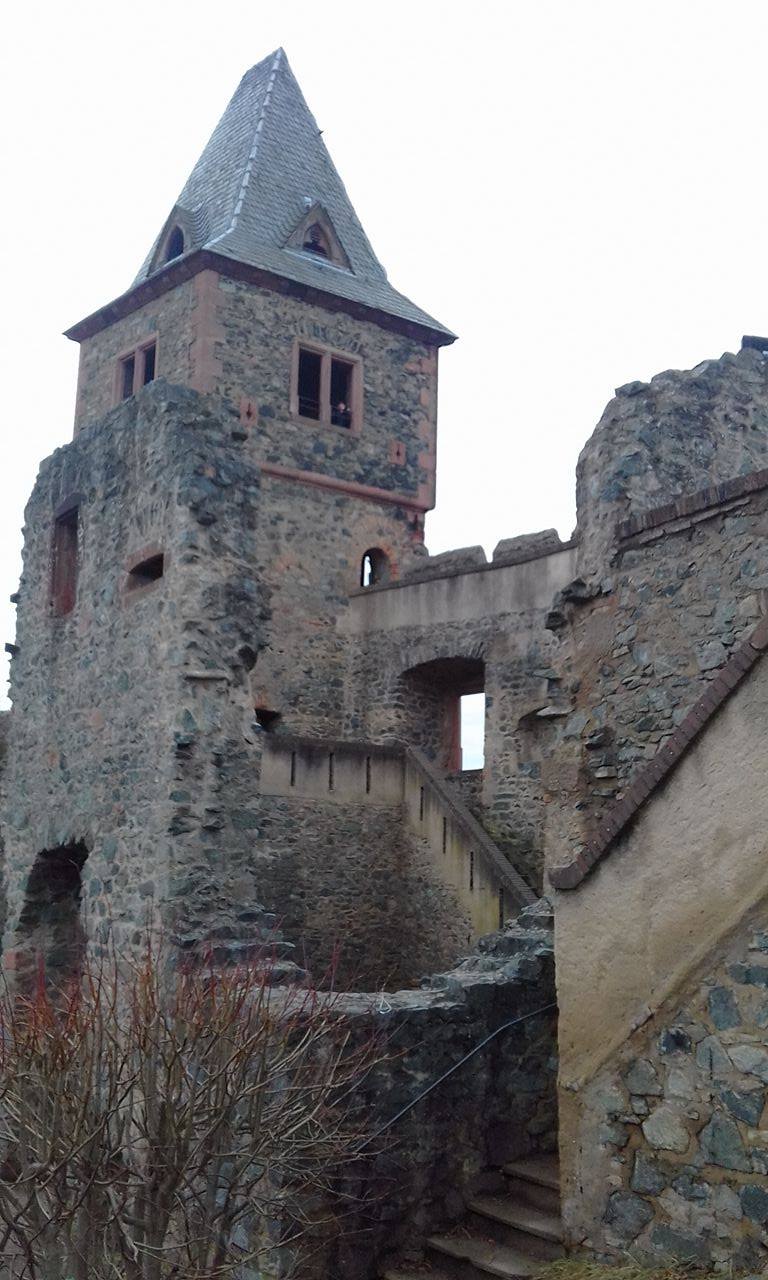 Is there a connection with the famous Mary Shelly’s novel “Frankenstein“? Although often described as a mysterious place, there aren’t any connections with the famous novel. Mary Shelly was indeed on a boat trip in 1814 on the river Rhine and had a break at Gernsheim/Rhine for a couple of hours at midnight. The castle is not visible even during the day as Gernsheim is 15 miles away.

But don’t be disappointed, Castle Frankenstein has legends to tell as well. The famous of it all is one the tells us about “ Lord Georg and the dragon.“

The Legend of Lord Georg and the Dragon

It is said that long ago a dangerous dragon lived in the garden near the well at the castle of Burg Frankenstein. The peasants of a neighboring village (Nieder-Beerbach) lived in fear of the mighty dragon. It is said the dragon would creep in at night and eat the villagers and their children in their sleep. One day a knight by the name of Lord George rode into town. The townsfolk were desperate, seeing a brave knight gave them hope, and they poured out their troubles and sorrows as he promised to help them. The next day he put on his armor and rode up to the castle, into the garden and straight to the well where the dragon was taking a rest in the sun. Lord George got off his horse and attacked the dragon. The dragon fought for his life, puffed and spewed out fire and steam. Hours passed as the two continued to battle. Finally, just as the knight was about to drop from exhaustion, and just as the dragon was going to drop from exhaustion, the knight plunged his sword into the underbelly of the beast and was victorious. But as the dragon struggled in agony, it coiled its tail with the poisonous spine around the knight’s belly and stung. Lord George and the dragon both fell. The villagers were so happy and relived that the dragon was finally slain they wanted to give the knight a proper, honorable burial. They brought him to the Church of Nieder Beerbach, in the valley on the east side of the castle, and gave him a marvelous tomb. To this day, you can still visit and pay your respects to Lord George, the Knight who slayed the Dragon in the 1200s. (http://www.muehltal-odenwald.de/geschich/nb/kirch-nb.html)

Things to look forward to in the Castle? Beside the mystery, the legend and the history of the ruins the remains, the Castle also serves as a tourist destination for those who are adventurous at heart. It is a favorite spot for cyclist during the weekends.

It is also a place for families to bond and watch the breathtaking view of Rhine-Valley.

How to get there?

Tramway: Line 6, 7, or 8 to Eberstadt, stop „Kirche“. Get out, turn left and follow Scholssstrasse, then „Frankensteiner Strasse“ until the end and then follow the mark: blue B (1 hour of trecking).

Anreise mit eigenem Bus, which means you have to rent your own shuttle bus to get there if you decide to go there as a group.

Autobahn A 67 exit at #7 ‘Pfungstadt’.
Head towards Pfungstadt until you arrive at the Burg.

Autobahn A5 exit #27 ‘Darmstadt-Eberstadt’.
Then towards Pfungstadt – follow the B 426 until you arrive at Burg.

Or simply read the street signs from A 5 at exit Pfungstadt/Eberstadt.

If you take the train from Frankfurt, Darmstadt or Bensheim exit at the station “Darmstadt-Eberstadt”. From the platform, follow the ramp down to the B426, towards the left, through the underpass opposite of the ASB building is the bus stop.

From the bus stop just follow the signs leading to Burg by either trecking in the existing trails going to the hilltop or through the main road.