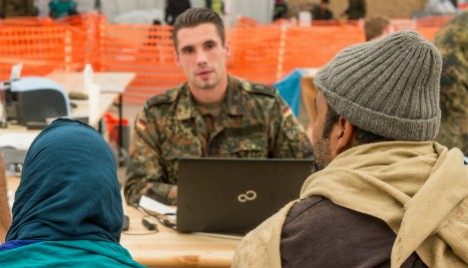 The war in Syria continues to be by far the biggest driver of migration. But the continuing violence in Afghanistan and Iraq, abuses in Eritrea, as well as poverty in Kosovo, are also leading people to look for a place where they can build a new life.

Germany has a plan for coping: a computerized system established in 1949 that is being revived to distribute refugees among the among the country’s regions.

The system was based in Germany’s 1992 asylum law, which was passed to deal with an influx of 260,000 refugees that year. The key is run through a computer system called EASY, developed by the federal migration ministry, it is a simple acronym of its German name, which translates as “Initial Distribution System for Asylum Applicants.” When the applicant’s name and data are entered, the program assigns a new German home.

To date, German officials said more than a million had been counted in Germany’s “EASY” computer system, that was  distributed across Germany, Bavarian social minister Emilia Müller of the Christian Social Union (CSU) told reporters in Munich, for counting and distributing people before they make asylum claims.

But for some, experts question the accuracy of the figure that the system has given.  They say that some asylum seekers might have been registered multiple times while new arrivals would sometimes take several weeks to register.