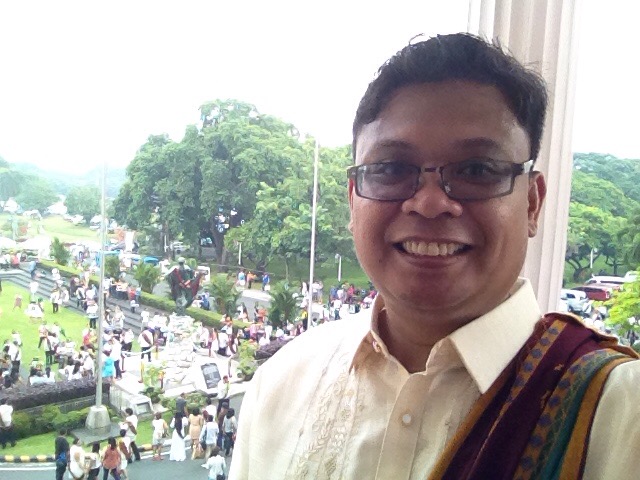 My friends doesn’t know about it, but i’m a science geek. Every summer in high school was spent in a camp, a science camp. The Philippine Society of Youth Science Clubs (PSYSC) invites the top students in the country to a camp where they learn  and create ways to help and protect the environment and foster friendships that would last a lifetime. The first camp I attended was held at Central Luzon State University (CLSU), Nueva Ecija,  this was the first time I met Raymund Narag to whom we fondly called “Kuya Raymund”. The year after that, I again attended the camp in Baybay, Leyte. And as expected, Kuya Raymund was also there with his big welcoming smile. With Kuya Raymund at CLSU

What do I know about Kuya Raymund? He was from UP. He was assigned as our team leader.  He was young but very passionate, intelligent and funny. We looked up to him like an older brother. He made us proud, he made us feel great, he made us all believe that we are going to make a difference in the world. He inspired us.

But on the 8th of December 1994, between 12:30 to 1:00 in the afternoon, seven (7) members of the Sigma Rho fraternity were eating lunch at the Beach House Canteen, near the Main Library of the University of the Philippines, Diliman, when they were attacked by several masked men carrying baseball bats and lead pipes. Some of them sustained injuries that required hospitalization. One of them, Dennis Venturina, died.

Kuya Raymund, who was then a member of the Scintilla Juris fraternity, was allegedly involved in a brawl with members of the Sigma Rho, a rival fraternity.

In 1995, when he finished his course at the University of the Philippines-Diliman, a warrant of arrest was issued to him. He was not able to join the ceremonies and accept his diploma.

This is his story.

I was not able to march in my own graduation rites in 1995 due to some profound experience that happened in my life. It was only seven years later, when I was acquitted, that I was allowed by the University to march. Twenty years later, and now as a UP Visiting Professor, I had the chance to experience the commencement exercise I truly missed. I wish to share and re-post my “graduation speech” that summarizes my saga of pain and redemption.

I should have graduated in UP Commencement in 1995. Unfortunately, just three days before the commencement exercises, a warrant of arrest was issued against me. I was allegedly part of a youthful brawl that caused the death of a young promising man. Together with other 10 other accused, I voluntarily surrendered to police authorities and submitted myself to the courts. Instead of a diploma, I showed my parents the papers taking me away from their custody and placing me under detention. Instead of marching to the stage with the applause of friends and relatives, I dragged my feet to the prison cell. My parents figuratively died. My family uprooted.

I languished in jail for six years, nine months and four days. I endured the full length of a criminal prosecution, or more appropriately, persecution. I patiently waited for the day of freedom, counting the days, weeks, months, and years as they come one by one. I silently bore the humiliation of getting out of the cells with handcuffs. I chivalrously let go the love of my life when she asked a time out because she had been too pressured to defend our situation. I accepted my fate peacefully– knowing that there is a reason for everything.
And indeed I had a mission. My exposure to the jail situation opened my eyes to the realities of the world. Our jail bureau is the least prioritized of all government agencies. It is low budgeted, it lacks facilities, and it is undermanned. Two thousand inmates are cramped in a building that can accommodate only seven hundred.

The jail developed a culture and political structure of its own. In order to support its custodial force, the jail management recognized the role of inmate leaders in the maintenance of peace and order and for the implementation of reformatory programs. For the inmates to protect themselves from the abuses of some erring jail guards, they formed and affiliated themselves with gangs, only to be abused later on by their own leaders. Jail community is not so different from Philippine society, where interest groups vie for limited resources, each one trying to outdo the others. There is corruption by the powerful, there is neglect on those who are supposed to serve, the weak and the uneducated are put on the sidelines and too afraid to speak and apathy and cynicism engulf most members of the community. The jail is in a perpetual state of structural conflict.
Paradoxical as it may be, this pathetic situation gave me the opportunity to show and prove the world that I am innocent. With my Public Administration background, I became a “trustee” in the jail’s record section and helped in classifying and encoding of the inmate files. Together with other detainees, we came up with a Functional Literacy Class Program that taught literacy and numeracy to inmates who did not finish elementary or high school education. We organized a paralegal desk through the support of volunteer units like the University of the Philippines Ugnayan ng Pahinungód, Preso Foundation, and Caritas Manila in order to expedite the disposition of the cases of my fellow inmates. We came up with spiritual programs like the Kristo Okay Sa Amin (KOSA) and enjoined our fellows in prayer meetings and bible sharing. We had thrice a year sports tournaments and regular cultural presentations, producing groups like the “No Bail Band”, the famous all-inmate band which produced the “Hiram na Buhay” a hit anti-death penalty song. I treated my fellow inmates not as criminals to be condemned but as souls wanting to be helped. Eventually, I became the recognized leader of the inmates, after winning their trust and confidence, and became the Mini-City Mayor of the Kapit Bisig 2000 Incorporated, a SEC-registered organization of inmates. As a mayor, I professionalized the relationship of the inmate leaders and the jail management and placed mechanisms that curbed graft and corruption. I articulated clearly the needs and aspirations of my constituency by putting these demands in the right perspective and proper forum. I came up with a Peace and Order Council that facilitated the resolution of conflicts among the warring gangs and proposed long-term solutions. These were done by empowering the gang leaders, by continually appealing to their good sense, and by delegating to them the responsibility to maintain peace.

Still, this experience in conflict resolution yet put me in another endeavor—to help in the maintenance of peace in campuses, which are constantly disturbed because of fraternity violence. I gathered all inmates with fraternity-related cases and learned from our experiences. As a living testimony, I asked the court to allow me to share my experience to other fratmen out there, praying that they will heed the voice for peace.

I did all these with the passion of a man enlightened with a vision. I had no hatred and bitterness. I was also a victim here—but a victim who will use his wretchedness to make positive changes in the society. I shall not allow the idiocy of my situation turn me into a lowlife that I am not. I graduated with honors, remember, then, I shall be honorable. And I asked God, no, I claimed from God my freedom, vowing that my experience shall be shared to anyone who would care to listen, if He allows me to live in the wild free world.  And it came.

On February 28, 2002, the Regional Trial Court declared my innocence. Evidence established that I was not in the scene of the crime. I was not part of the fracas. Of course, I was wrongfully accused! I went home a free man because I had proven and shown that I was innocent. My parents figuratively lived again.
My acquittal in the criminal case was the basis for my college to push for the conferment of my honors in the University Council. Now that I am cleared of any moral turpitude case, UP willingly obliged, after seven long years.

I am going to march with honors tall and proud. I am going to march in behalf of all the inmates inside the prison cells to say that there is light at the end of the tunnel, that in God’s time, all will be fine. I am going to accept my gold medal in behalf of all those wrongfully accused and convicted to say that they should maintain and show their innocence despite the wretchedness of the situation, for the truth and clear conscience will eventually prevail. I shall be in the company of the honorable in behalf of all those who had been victims of prejudice—those judged by the groups they were associated with, or by the color of their skins, or by their mere incarceration, in order to show that there is dignity in every experience, if given the proper perspective. I shall receive my diploma in behalf of all the sons and daughters who want to make their family and friends proud, for truly, we do not live for our selves alone. I shall join the empowering occasion to challenge those who had been too weak to fight for their love in the face of difficulties and to egg them to be true to themselves for heaven could just be in the horizon.

I shall be onstage to appeal to all fraternity members out there: PLEASE LET US STOP THE CULTURE OF VIOLENCE for many dreams have been broken, families shattered and lives lost. We cannot allow another Dennis Venturina, Nino Calinao, Michael Icasiano, and Dan Deniel Reyes to die again. I know, for I know too well the difficulty of letting innocent men pay for their deaths.

Thus, I shall march to say thank you to all those who believed in me, in the pureness of my heart, when the world thought otherwise.

I shall march honorably and move on.