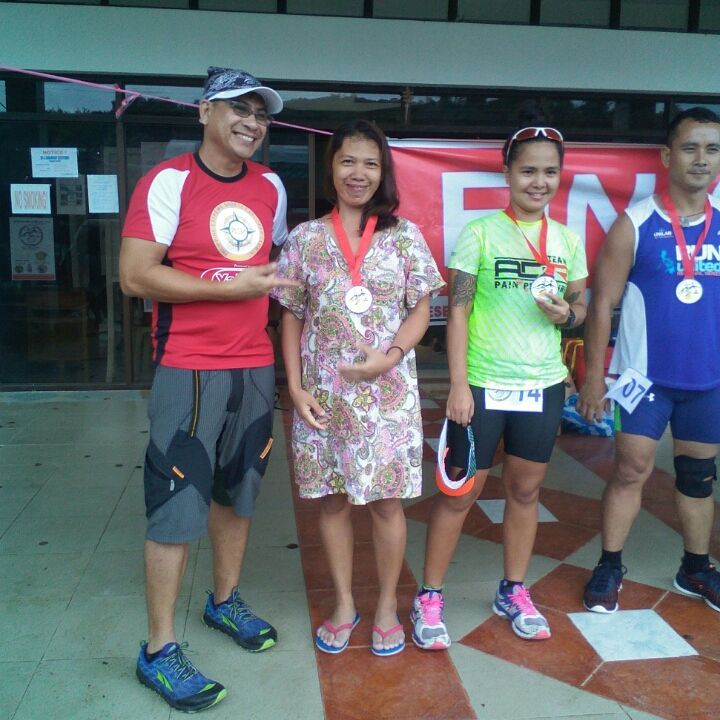 I remember the first time i joined a marathon, it was for the Dinagyang 5K Black Run. We participated  as an Organization, the International Students Organization-CPU Chapter, Iloilo City.  It was at an unGodly hour, we arrived at SM City between  4-5 oclock in the morning,it was cold, raining and I was still half asleep/awake. During the run, I walked, went inside different shops to pee or to eat something. I didn’t take it seriously.  I was the last person to finish the race, with the cops tailing my behind. That was 2 years ago.

2 years later, after giving birth to a beautiful baby boy, I gained weight and lost interest in any physical activity. Getting the groceries is the closest physical activity I could get. I was depressed and spent most of my free time in front of the computer, I felt useless at one point. Then I met a friend who was a software engineer and an Ultra-runner (I wrote an article about him, see link: http://filipinos-in-germany.de/when-coding-and-running-collide/), An ultramarathon, also called ultra distance, is any footrace longer than the traditional marathon length of 42.195 kilometres (26.219 mi). He gave me  tips on what to expect in a marathon and other information that may help me finish a race. I was pretty lazy at first, telling him that “it was raining”, “extremely hot”, “I’m not feeling well”, and a bunch of other lame excuses. He would simply say that I should just “go out and start moving!”

I have atleast a month to prepare for it. Life hasn’t been easy for me and the struggle continous everyday, I’d love to say that my family gave their unconditional support and understanding right away but, No. At first my mother laughed at me and seriously thought I was joking but seeing me get out of the house to walk or to jog made her think otherwise. And the rest of the family, having doubts at first, gave me their blessing when I left Roxas City to pursue this “impossible dream.”

previousJoin Sofia and her army of titas, as they explore on city life, gossips, social media manners, plastic surgery and everything in between. – written and created by XUBI Hernandez
nextIloilo Pride Team and Bahaghari National LGBT Organization Shirts
Translate »