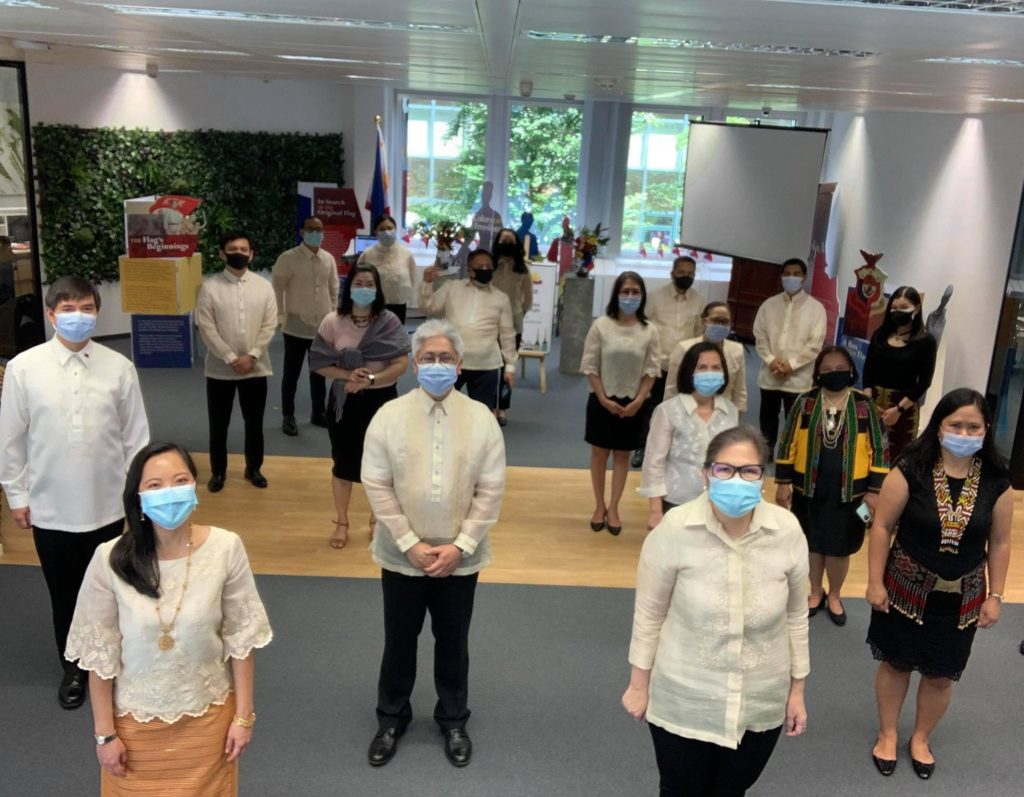 Press Release
12 June 2020 – A flag-raising ceremony and the opening of the “Colors of Freedom: The Sun and Stars, Stories Behind the Philippine Flag” exhibition were held today at the Consulate premises to commemorate the 122nd anniversary of the proclamation of Philippine independence with this year’s theme, “Kalayaan 2020: Tungo sa Bansang Malaya, Nagbabayanihan at Ligtas.” The simple affair was conducted in light of the prevailing coronavirus pandemic.

“During this unprecedented time, we honor not just the sacrifices of our heroes who fought with incredible courage to secure our nation’s freedom but also those working in the front lines, including our healthcare professionals, who put themselves in harm’s way during this coronavirus pandemic,” Consul General Evelyn D. Austria-Garcia said during the event.

The exhibition materials, which were made by the National Commission for the Culture and the Arts (NCCA), feature five stations depicting the history, evolution and meaning of the color and emblems of the Philippine flag. The exhibit’s stations include the following: (1) Introduction: Colors of Freedom; (2) The Flag’s Beginnings; (3) In Search of the Original Flag; (4) The First National Flag; and (5) A Ban on the Flag. The activity was attended by the Consulate’s personnel and Department of Tourism Office in Frankfurt representatives. The exhibit will run until 30 June 2020.

Other online Independence Day initiatives undertaken by the Consulate were the celebration of National Flag Days from 28 May to 12 June 2020, online streaming of the Independence Day celebration in Manila, video message of Secretary Teodoro R. Locsin, OFW Frontliners Tribute Video and the Tanghalang Pilipino’s “Mabining Mandirigma.” The Consulate will also launch several videos about Dr. Jose Rizal in commemoration of his birth anniversary on 19 June.

The Consulate had planned a two-day Barrio Fiesta in Frankfurt this June, complete with a concert, cultural presentations, art exhibit, food fair, cooking demonstrations and an economic conference. The activity had to be cancelled to conform with measures put in place by German local authorities to contain the spread of coronavirus.